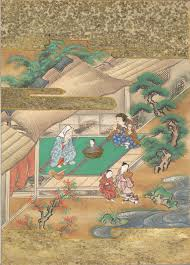 
The version I found was only ten pages long and a part of an anthology of early science fiction (!) stories edited by David Lear. From the mammoth and encyclopedic “1001 nights” that can only be read in abbreviated form to a tiny story that I wish had been blown up into something more. What a difference.


Yet I found this tiny story absolutely delightful and it is easily the best of the eight stories included in the anthology.


In this story a poor bamboo cutter finds a tiny girl in his field. He takes her in and raises her as his daughter and she is growing fast, like really fast. Soon she is a beautiful woman and of such radiance that her fame spreads widely. She gets many suitors, but she gives in to none of them. Instead she gives the most persistent of them impossible tasks they cannot complete. Finally even the emperor of Japan becomes interest in her. When she refuses his invitation he seeks her out and is captivated by her. Kaguya, as the girl is called, claims that she will die if she leaves her home, which means that the emperor cannot have her either. In the end however she is visited by her family from the moon who takes her away in their spaceship.


I would call this a classic fairy tale with a twist.


Frankly I did not see that part with the spaceship coming, but that explains why it is included in a science fiction anthology. At first this sounds like something Monty Python could have made, but when you read the story it makes perfect sense and it is written in beautiful prose that makes it the sweetest story ever and not like my brutal synopsis above.


The style is quite different from the formulaic fairy tales from the west, but whether it represents a typical style of Japanese stories I really cannot tell. This is my first Japanese fairy tale ever. There are none of the repetitions typical of this kind of story and the story arc also lacks the classic climax. She is not marrying the emperor or becoming crazy rich, but, ta-da, she just goes home to the moon. Exactly what that is supposed to mean I am not sure, except that she represents something otherworldly which can be admired, but never owned or ruled by mortal men.


By some crazy coincidence it turns out that there is a Japanese cartoon called “Princess Kaguya” from 2013 and released in Denmark just yesterday. I was listening to a movie show on the radio when they suddenly started talking about it and I realized it was the very same story that I had just been reading. Except that the 10 pages had become a 2½ hour movie. I think that beats even “The Hobbit” for inflation. So far I have not seen the movie, but the trailer is awesome. It looks like a beautiful movie made in traditional Japanese drawing style and somehow that fits this story just perfectly.


For a ten page read “The tale of the Bamboo Cutter” is surprisingly rewarding and it is so easy a read that it is almost criminal not to read it. I recommend it.
Indsendt af TSorensen kl. 11.01 Ingen kommentarer: