The History of Thomas of Reading, Or the Six Worthy Yeomen of the West - Thomas Deloney (1600) 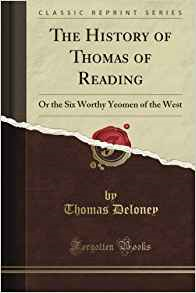 
“Thomas of Reading” is not a normal novel. There is very little in terms of progressive story. Rather it is a series of intermezzos involving a limited group of people centered on a group of clothiers in provincial England. One is trying to have an affair with a hostess at an inn, another is murdered by another host and hostess. One is having trouble with thieves stealing his wares and find that executioners are difficult to find and some get good friends with the king who recognizes the clothiers as the backbone of the country.


The closest the book gets to an actual plot is the story of the high-born Margaret, who when her father the Earl falls from grace finds herself alone and destitute and becomes a maid with one of the clothiers. While nobody realizes she is a noble lady she does get a lot of admirers and finally runs away with one of them, a duke who happens to be the kings rebellious brother. When the king finds out his brother has run away he gets royally pissed and it end badly for Margaret and the duke.


I get the clear impression that the book is based on some folk tales going back to medieval times. Certainly there are references to a time well before that of the writing and hints that the events of the story have fostered local legends, place names and traditions still known to the reader in 1600. It is very possible that the author, a Thomas Deloney, has elaborated on these stories and thereby created this tapestry of events.


This is a very entertaining read. The author is not blind to the comical aspects of the situations and much of it still works these four centuries later. It is also a far more tender story than what I have been reading lately, It does not dwell as much on mutilation and gore, even when it gets juicy, and prefers to tone it down, which suits me just fine. That is perfectly in line with the positive note the book is playing. We get praise rather than condemnation, success rather than failure and hard times are mostly used as a moral lesson. This could all make the story somewhat tame, but the colorful writing gives it plenty of juice.


I was laughing aloud from the tale of the clothier’s wives who went to London and discovered a world of feminine luxuries to the chagrin of their husbands. Ah, nothing has really changed… Another hilarious story was that of the clothier who wooed an innkeeper’s wife and went to very elaborate trouble to tumble her only to get caught red-handed by the innkeeper.


“Thomas of Reading” will never be considered the greatest book ever written, but it is a very enjoyable one and easy enough to access to make it recommended. I could think of worse books to bring along with me on a plane.


It will likely be a while before my next post. “Don Quixote” is hefty brick of a thousand pages…