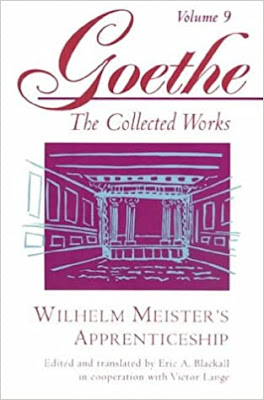 Can you be impressed and confused about a book at the same time? I hope so, because this is exactly how I feel having just read Goethe’s “Wilhelm Meister’s Apprenticeship”.

In this we follow a young man called Wilhelm Meister of middle-class origin. Wilhelm Meister is in love with theater. Watching it, the production, the plays, the characters and not least the actors and especially the actresses. He is chaffing at the expectations that he will pursue a career in the family business and easy to distract with anything theater.

On a business trip he gets seriously sidetracked and involved with actors and actresses and as they see him as a source of funding, he is soon involved in a theater project. Wilhelm’s ideal about theater and the reality of the business are quite different sizes and while he is not exactly being abused, he is being led on and for awhile I saw some comparison to “Der Blaue Engel”. But Wilhelm Mester is a lot more reflective than Professor Rath, taking a lot of responsibility on his shoulders and genuinely care for his, mostly ungrateful, colleagues.

Yet, Wilhelm is powerless to actually take charge of his life. Whenever he tries, it becomes false starts and instead he just drifts along from a conviction that fate is taking him to the right place. The result is that other agents are constantly pushing him around and he is lord of nothing.

There is a break in the story and when it returns, the tone is different. It turns out that practically everybody in Wilhelm’s surroundings is connected, that he is being manipulated in a way to discover for himself his true self by something called the Tower Society. Exactly why they take this interest in him and what their target is, is entirely unclear to me. The result, however, leaves Wilhelm as powerless as ever to control his own life.

Johann Wolfgang von Goethe wrote the first part in the 1770’ies, then only resumed the manuscript 20 years later and that shows. Where the first five chapters feel like a burlesque on the emerging theater scene in Germany with Wilhelm as the blundering fool but also as our keen observer, the last part is entirely different. Suddenly all the strings are being tied up. Apparently insignificant characters get a purpose and there is a mysticism and presentation of ideas entirely absent in the earlier part. Clearly Goethe has something on his mind and got some ideas about education, religion and purpose in life. But who makes that purpose? Are we born with it? Guided to it by “helpful” people or are we free to set a course on our own? Is Wilhelm Meister better off drifting along, making decisions on the spur of the moment? Or does he get to a better place if he is guided? And who reserve the right to guide us?

I sense a far more reflective Goethe in this latter section, one who is influenced by the enlightenment and the revolutionary thoughts in France. This is an age where fixed patterns are breaking up and people are allowed to reconsider their place in the world, especially the bourgeois. But what is to replace that earlier structure?

Meanwhile, Goethe himself had a love affair with the theater and was deeply involved with the theater at Weimar (where he wrote his most famous work “Faust”), so I definitely sense an autobiographical streak here as well. Is Goethe ironizing over his own life?

Ultimately, I am not certain what exactly Goethe is aiming toward with this novel, and I wonder if he was himself certain. Maybe he was just bouncing ideas and Wilhelm Meister was the unwilling victim of those ideas.

Absolutely recommended. Among the best books on the list so far.