The History of Tom Jones, a Foundling - Henry Fielding (1749) 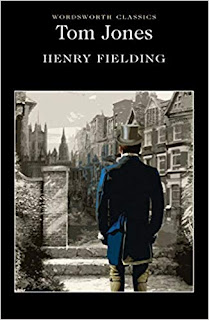 
Readers of this blog (in case there are any) may remember that I was not terribly impressed with the first book “Joseph Andrews”, but with this second book Henry Fielding has redeemed himself. It is a much better book.


This story follows the adventures of Tom Jones. He was a baby left on the bed of a widowed and childless nobleman, Mr. Allworthy, who raised him together with his younger nephew, Mr. Blifil. Where Jones is cheerful, honest but also impetuous, Blifil is brooding, servile and heartless. While Allworthy is a good man and genuinely cares for Jones, Blifil finally manages to scheme it so that Jones gets kicked out in disgrace. This coincide with Jones and the neighbor Mr. Western’s daughter Sophie fall in love, only to be misinterpreted by Mr. Western and his sister as Sophie is in love with Blifil. Excited, they set up the marriage only to discover that it is the poor Jones with no family name and not the rich Blifil that Sophie loves. This sends her packing as well to avoid the wedding.


We then follow the many things that happen to Jones and Miss Western on their separate journeys until they finally arrive in London for a showdown. It goes without saying that the situation for both get worse and worse with Tom ending up in prison for murder and Sophie forced to accept marriage with a would-be rapist if not Mr. Blifil. How can they get out of this mess?


“Tom Jones” is a comedy and that means that everything is written with a glint in the eye for amusing effect. And thank heavens, it is actually funny. Some elements are of course dated, but many are of a timeless quality that makes this story amusing also for a modern reader. It surprised me that many of Fielding’s humorous observations of men’s and women’s nature hit home today. The characters of Mr. Western and his sister are hilarious. Mr. Western is a loud, rough and quick to action country-side squire, disrespecting anything that smells of high-culture, while his sister is equally loud and brass but embracing high-culture to the extend that she considers herself refined and world-wise. Both however seem to misunderstand or misinterpret even basic concepts of what they profess, yet have full confidence in themselves. Their arguments are many and wonderful to read. As are the ridiculous discussions of the clergyman Mr. Twackum, whose favorite tool is the whip, and Mr. Square, the logician, who insists on the natural rightness of things. Both hate each other and both strongly support Blifil against Jones. Idiots who insists on being right are almost always funny.


Fielding has many observations of the workings of world around him, mid-eighteen century, politically, socially and on human interactions. He is cynical and sarcastic, but delivers his jabs in so good a style that it would be difficult to be upset with him. He is also not blind to the negatives of his society, the prejudices against the poor, gypsies or prostitutes or the unfairness inherent in social hierarchy or between genders. Yet, he stops short of being revolutionary. He never goes so far as to criticize the system, only the people representing the system. The faults are human flaws, not inherent flaws in the system. Women are still subject to the men in their lives, the poor are subject to the rich and name and title do matter. Jones can only succeed when he is no longer a foundling but of proper family. Sophie may flee her father, but ultimately she has to bend to his will.


This is a weird balance as if with one hand Fielding is progressive, yet with the other he is conservative. I suppose this has to be seen in the light of his time and what was possible to write in 1749. As it is, I have a feeling he was pushing the envelope.


The story has a good flow and it is an easy book to read. Despite Fielding breaking in with personal comments to the reader from time to time there is a good pace and we never loose track of where we are in the story. Only near the end it seems that the pace becomes too fast as if Fielding ran out of time and wanted finish off in a hurry. There are several potentially great moments that Fielding rush past instead of exploiting them. Several meetings are simply referred to having taken place rather than being described, such as when Jones learns of his origin.


It is a small compliant though and does not change the general impression that this is one of the best books so far. Unfortunately, I have not yet seen the 1963 movie based on the book but I should look it up. The book however is absolutely recommended.