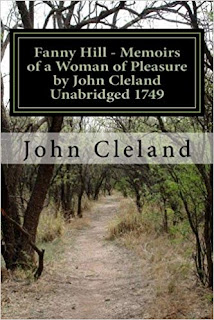 
“Fanny Hill” is a first person narrative in retrospect of a woman, Fanny, who comes into the city from some countryside backwater very young and all innocent. She is quickly picked up by a brothel who can make a lot of money on selling her virginity. This backfires when Fanny runs away with a young and handsome client with whom she starts a very sexual relationship. Some month later he is suddenly sent off to sea. Fanny becomes a held woman by an older nobleman, which lasts until he ditches her and Fanny now becomes a member of a high-class brothel until eventually she gets reunited with her original boyfriend.


This is not a terrible interesting narrative, but it also merely serves as a vehicle for describing Fanny’s many sexual encounters. You might have thought from the above that this would be a terrible social indignant story about trafficking, but rather on the contrary, Fanny embraces and enjoys all her sexual activity. To her this is exciting stuff and something she craves and so, without shame, guilt or regret she tells us of all her adventures.


It is surprisingly liberal and certainly at the entirely opposite end of the spectrum of the contemporary Samuel Richardson. Gone are all the prudence and talk of virtue and the scare of sexuality. As a twenty-first century reader I cannot help feeling that it is liberating reading this after all the constrained morality of contemporary writers. You easily get the feeling that back then people where so estranged to their sexuality it is a wonder they had children at all.


As most such texts it quickly gets boring. Sex is just one of those things that are more interesting to do than to observe and it quickly gets repetitive. The author tried to vary the language and consistently uses metaphors for the sexual acts with great variety, but fundamentally it is the same thing happening over and over again. Fortunately, this is not a long book.


The story about the book is more interesting than the story itself. Through the centuries this has been THE dirty book that people would look for or prosecute and it has been at the center of much debate about sexuality and pornography. Incidentally it was Fanny Hill that was instrumental in legalizing pornography in Denmark in the sixties. If the ban on pornography had to be maintained then this book should be outlawed, but the historical value of “Fanny Hill” made that absurd and so the ban was lifted.