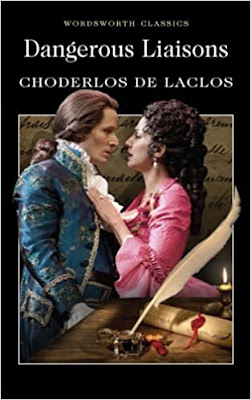 The focus on the book list is shifting towards France and with Choderlos de Laclos’ “Dangerous Liaisons we are most unusually not in Rousseau territory and that in itself is a blessing.

This is the period just before the French Revolution, that period so famous for painted effeminate men with silly wigs and women in monstrous outfits, both with too much time on their hands and so little useful activity to spend it on. In France particularly so. “Dangerous Liaisons” is well and proper lodged in this environment.

The Vicomte de Valmont and the Marquise de Merteuil live and breathe for the games they play with other people. Their plots are to seduce their marks into scandal and ruin as if getting some sadistic pleasure from destroying people in the public eye while getting as much pleasure themselves in the process. In fact, I never really got the motivations straight. Is it malice or the glee of watching the morally self-righteous exposed as hypocrites? Or a selfish hunt for pleasure? The author is never entirely clear on this, which makes it tempting to think they are simply what “ordinary” people fear from rakes and libertines without caring too much at understanding their actual motivations. In this way they become more like boogeymen than real people

Anyway, the Vicomte and the Marquise keep up a correspondence discussing and cooperating on their various conquests. Valmont has his eyes set on a prudish woman, Madame de Tourvel whose husband is away on business while Merteuil wants to turn a 16 year old girl just out of school into her pupil. Cecile de Volanges is a naïve girl who is engaged to an older officer held up by an engagement on Corsica and Meteuil wants to use a young nobleman, Danceny, and later Valmont himself, to corrupt her.

This was clearly written as an exposé of the depravity of the idle nobility and struggles with a balance between enjoying the schemes and plots and juiciness of the affairs, and on the other side the moral codes that strongly disprove of all these sexual adventures. It is almost as if Laclos does not himself know if he approves or condemn Valmont and Mertuil. He lets them be successful in their corruption, deliciously so, but he also punishes them for their flawed characters. They are both smooth and clever, but also strangely delusioned, as if they only see the reality they want to see. Valmont is charming with the girls, but in his own head he is superhuman and in his interpretation of his exchanges with other people he only picks up the details that support this self-image.

Probably telling for the sympathies of the author it is not the impotent and useless morally upright that defeat Valmont and Merteuil, but their own weapons they turn on each other in an implosion of self-destruction. The women in particular are gullible and easy marks.

I was not blown away by “Dangerous Liaisons”. To be that, I think you need to feel the naughtiness of observing these shenanigans. The schizophrenic elements felt disturbing as if Laclos held back or could not make up his own mind and the epistolary form means a lot of repetition, not necessarily because the same events are described from several angles, but because the form itself includes all those tiring forms and protestations, making large chunks of each letter empty chatter. I did not feel this was scandalous in the way it was intended, but rather scandalous in the description of the idleness of these people. Whether they are men with nothing else to do than seducing women or women with nothing else to do than being bored.

It also feeds into a sexual moral that allows a lot more freedom for men than for women. It recognizes some of this unfairness in the dialogues, but seems in the final judgement to accept a much higher prize for women than for men for digressing from the morally acceptable path.

It was an okay book, but not recommendation from me.