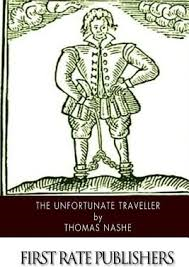 
I will not claim that I understood everything, quite the contrary. I was often left bewildered by sentences that seemed to give key information I entirely missed. So I am not entirely sure what is going on here, but the gist of it is thus:


The narrator, one Jack Wilton, has ended up in Europe as part of some war involving the English king. Jack is a prankster who pulls some stunts that backfires badly. I am sure these shenanigans would be hugely entertaining if I had understood what he actually did. Something about telling the cider seller that the king was suspecting him of treason and convincing a minor officer that he would win lots of glory if he undertook a particular suicide mission. In any case Jack leave the army in disgrace and takes on a tour of the continent. In Germany he gets involved in a religious raucous that end poorly and in Venice he get arrested for another person’s crime. He escapes with a girl to Rome where he gets into even more trouble. This involves his landlady being raped and killed with Jack accused of the misdeed. Saved in the nick of time he proceeds to be caught by a Jew (yes, this is highly anti-Semitic!) who sells him to a doctor to be cut up in anatomy class and finally he becomes a sex slave of a local noble woman (oh horror).


This is a book that starts out as a comedy, at least that seems to be the intention, but ends as a gruesome cautionary tale with terrible torture and villainy. Several people are killed in the most terrible manner, described in bloody detail and usually with a lengthy speech from the killer or the victim. I cannot say that was amusing to read.


Thomas Nashe has very little respect for anybody. Nobility, clergy, burhgers, and Jews, everybody get a rap and are described as depraved and vicious. That would probably have amused a lot of people in the late 16th century and would certainly have been daring, but this was also a time where the English Crown was at odds with the rest of Europe and a text that would make the English look good and continent depraved and amoral would have been welcome. That indeed seems to be the purpose of the text.


Even us Danes gets a blast:


“With the Danes and the Dutchmen I will not encounter, for they are simple honest men, that with Danaus daughters do nothing but fill bottomles tubs, & wil be drunk & snort in the midst of dinner”


To which my wife said nothing has really changed…


Had “The Unfortunate Traveller” been rewritten with modern spelling and wording I would have enjoyed it a lot better or at least understood it. Whether I would actually have liked it is doubtful though. It dwells far too much on human misery and violence be an enjoyable read.
Indsendt af TSorensen kl. 11.53 Ingen kommentarer: