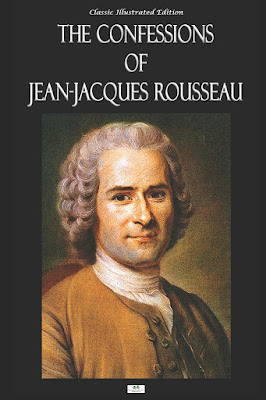 Jean-Jacques Rousseau has not been my favorite acquaintance over the past year so when “Confessions” arrived in the mail I was pleased this looked manageable, the book is barely 200 pages. That was until I opened it. This edition was written with the smallest font imaginable, and my wife immediately vetoed me ruining my eyesight on that. That would be too much of a sacrifice for Rousseau. Instead, I cheated and got is as an audiobook. In that format it is still 30 hours long, but had it not been for that I am likely to have spent the next half year in pain, reading it.

To my great and pleasant surprise “Confessions” is a lot better than expected. In fact, it may be the best of all four of his books on the List. At least the first half of it.

“Confessions” is Jean-Jacques Rousseau’s autobiography and what makes it stand out is that this may be the first of its kind. I feel confident there has been earlier autobiographies, but not with Rousseau’s zeal of being brutally honest. In this way it set a new standard and became hugely influential. At least that is what I keep reading.

A critique of “Confessions” will necessarily be a critique of its author as well and Rousseau was a complex one. The way he tries to present himself is as an honest man with no desire for conflict and without disposition for hatred and avarice, but with plenty of faults in the form of shyness and stupidity as well as naivety. The way he across though is as a smart man prone to paranoia and a need to be liked and accepted. Although he continuously states that he bears no ill will to anybody, he readily throws accusations left and right and his text often becomes more of a defense than the confession he claims to be writing.

When Rousseau is best he is actually funny. Particular in his recollection of his youth he throws up some pretty baroque scenes and describe some amusing characters. This was a surprise, having become used to his normal endless stream of complaints. His description of his time in Turin and Venice are not a little interesting and colorful.

It is also interesting to note how relatively modern his life was. Rather then simply apprenticing himself, Rousseau shops around, trying this and trying that. He travels a lot and face the differences in people with an open mind that makes him a good observer. Rousseau enters into an odd relationship with the older Madame de Warens, which can best be described as a hippie collective. He becomes a music teacher, a diplomat, a tutor and a cartographer until he eventually starts writing. When going to live in Paris Rousseau meets Therese with whom he begets five children which are all given away to an orphanage and only marries late in life. Pretty unusual stuff.

The second part of the book sees him fall out with everybody and their mother. Rousseau sees enemies everywhere, plots designed for his destruction and almost every friendship of his turns sour. This despite he, through his writing, has been elevated to the highest circles and is sought after by the upper nobility. That all this could have something to do with the highly inflammable things he has been writing on everything from statecraft to religion and education, not to mention his bigotry against almost every craft in existence, never seems to occur to him.

Although this felt long and confusing towards the end, I must say I enjoyed this (audio)book a lot more than I had anticipated and I guess the best story Rousseau had was the one about his own life.