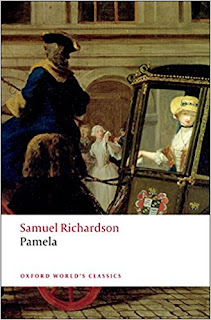 Pamela or Virtue Rewarded
Remember how a few month ago I read Henry Fielding’s response to Samuel Richardson’s “Pamela”? Well, now I actually got to read “Pamela” and I must say I liked it a lot better than “Joseph Andrews”. In fact, this may be the best book this year so far.


What works so well here is that for all its length the story here is driven forward so I am actually interested in finding out what happens on the next pages, it is a classic page-turner, and that despite that the story in itself should not be something that would appeal to me. Or at least it works very well until the half way point.


“Pamela” is an epistolary (based on letters) novel featuring a young (16 years old) servant girl, Pamela Andrews, who is being chased by her lord and master, the wealthy squire, Mr. B. Mr. B wants some hanky panky but Pamela protects her virtue (virginity) fiercely and so Mr. B, who is not used to be refused, starts to obsess about getting her. He abducts her to his second estate where she is placed in house arrest in the hope of breaking her. His attacks on her becomes worse and worse until she is close to taking her own life. At some point he realizes he is not getting any further on that path and so changes his approach. He becomes nice and friendly to her and when he proposes to her she is finally won over and they live happily ever after.


The first part while she is chased and her imprisonment, was captivating. I very much enjoyed that part. The sense of being under siege comes through very well and we get as nervous as she is. She can trust no-one and everything she does is being turned against her. As her fortune changes however the pace and momentum go down and I believe it took about a hundred pages to get that wedding set up. From that point, barring twenty pages of intense (and interesting) conflict with Mr. B’s sister, the Lady Davers, the story gets excruciatingly slow and drawn out. Really, had the book ended 60% in at page 300 I would have given it top ratings.


For a modern reader Pamela may seem overly protective of her virtue. Her fierce resistance to starting a relationship with her master may be difficult to understand, but in the eighteen century this made a lot of sense. Having a child outside of marriage would doom a girl, literally, and even the suspicion of have had an affair would blot her reputation almost as much as if she had had a child, never mind the religious repercussions people believed this could have. Pamela constantly fears being ruined and she has a very good point.


In this era it is also the most natural thing that wealthy nobility can get away with almost anything against their serfs, who has no protection what so ever. I would not even be surprised if they could get away with murder and dallying with the serfs would from their point of view be of no consequence.


As a modern reader Mr. B comes through to me as a selfish, mean and unreliable person. In this capacity he is a good villain in the first half of the book. When he seems to reform, he is completely forgiven by Pamela and indeed by everybody who hears the story, which is passed on with some glee by Mr. B himself. This is not so easy to chew. Of course, the moral here is than reform is good and forgiveness is a holy duty, but here we are asked to accept Sauron as a reformed gentleman!


In some ways “Pamela” is ground breaking. A servant elevated to the highest circles in society and a high-born gentleman marrying a servant was unheard of at the time. This sort of socially mobility belongs to the twentieth century and not the eighteen. For Pamela to resist her Lord would in her time practically make her a criminal. Also, the author very explicitly asking nobility to behave themselves and not take their power for granted is a seditious move.


Yet, it is also scarily old-fashioned in many of the views. There is still an unquestioned accept of the master – servant relationship and the class structure in general. Religion is also a very strong element, which is probably not surprising, but it does start to annoy when for the millionth time we are told it is God’s work that Pamela has been married to Mr. B, when very clearly this would never have happened but for the actions of Pamela herself and Mr. B. Pamela’s humility also gets a tad too much and is a large part of the reason the last third of the book is unnecessary.


Still, it was a pleasant read and a nice surprise. Which may be what I need to get started on the next book “Clarissa”, also by Samuel Richardson. At 1500 pages it may be some time before I get to write the next review.
Indsendt af TSorensen kl. 13.09 Ingen kommentarer: