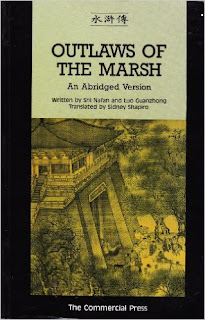 The Water Margin or Outlaws of the Marsh
My reading plans were thrown into a mess when I accidentally bought a children’s edition of this book. Sure it looks sweet with nice drawings, but at 53 pages it seemed a poor substitute for a story spanning in its complete form 120 chapters. So, with some delay I found another version, abridged, but substantial enough to cover the essential story and the feel of the novel.


“Outlaws of the Marsh” is another story attributed to Luo Guanzhong, this time together with a fellow named Shi Nai’an, and that means that we again are on uncertain ground on the actual origin and that there probably are a hundred different versions of the story. That also means that I can only really speak for the version I read.


I found it an enjoyable read. A huge advantage with Chinese writing is that the written language does not age. In a western translation you simply pick the modern equivalent of the word the Chinese symbol represent and so the language never gets quite archaic. Add to that the colorful language used and the action packed sequences and you get the picture. This is low brow enough for most readers, all the way down to my level.


“Outlaws of the Marsh” is a Chinese Robin Hood tale of a gang of outlaws in 12th century China who preys on the rich and supports the poor while upholding a chivalrous moral code amid a sea of corruption and power abuse. That would explain the longevity of the tale and why it also works for us in the west.


The Liangshan Marsh gang is a sprawling gallery of characters, the leaders alone count 108 individuals. That is also the largest weakness of the story. With names like Song Jiang, Li Kui, Zhui Gui or Wu Song I quickly got lost in the characters. The first half of the book is a recounting of how each of them got to the marsh and while each of these stories are interesting it also means we only follow a character for a chapter or two before he disappears from the story for a long while as the book proceeds to the next character. By the time his name pops up again I would often have forgotten exactly who this character was. As the story loves to make long lists of names it becomes blurry to say the least. Even a reader well versed in Chinese names is bound to get confused.


Individually the characters are great. An officer turned monk to escape the law is kicked out of his temple for decidedly unholy behavior. Another hero gets drunk and decides to cross a mountain with a dangerous Tiger. Each of them are guilty in some vice, sometimes even capital crimes, but always their intent is good and so they are the kind of flawed heroes most people can relate to. With our modern sensibilities some of them definitely cross the line. Wanton violence and anger is not as excusable as it used to be and it is sometimes difficult to see how the outlaws are better than those they fight.


The second part of the book recounts some of the battles the Liangshan Marsh bandits gets involved in. Battles that are punitive against some slight or raids to get resources. Usually with the bandit being smarter than their opponents, snaring them into some trap or using guile to outwit them. Most noteworthy is a battle that kills the bandit leader Chao Gai and the subsequent war lead by the new leader Song Jiang (a man of many virtues) to revenge his death.


Not everything is great though and while some of that can be ascribed to the age and cultural differences they are still jarring. Women are rare in the book. When they appear they are consistently described as wanton whores, unreliable, fickle and weak. They act with no honor, are greedy and generally to be avoided. Another item I had a hard time coping with was the way a vanquished foe would be absorbed by the bandits and even straight away become a member of the leadership. It does not matter how loyal he is or how deeply he despises and hates the bandits, once defeated he will actively join their cause. There is probably something here I do not understand about Chinese culture, but it sounds very strange to me. At the very least such a vanquished enemy would be unreliable and to be handled carefully, not made your leader. With the magnate Lu Junyi this becomes even grotesque. The gang wants him to join so he is lured from the city into the region of the marsh. Lu Junyi is eager to fight the bandits so when they challenge him he rush headlong and singlehandedly into battle against an enemy hundreds of soldiers strong. The battle is fierce, but largely due to his stupidity the bandits gets him outmaneuvered. Defeated he now joins the ranks and the gang wants to make this complete idiot one of their leaders. Hmmm…


There are bound to be a number of issues with very old stories from far away countries so I am tolerant and let them pass and it does not change that this is a very enjoyable read and much recommended. I think I will use the children edition for my son. Maybe make the women look nicer.
Indsendt af TSorensen kl. 12.32