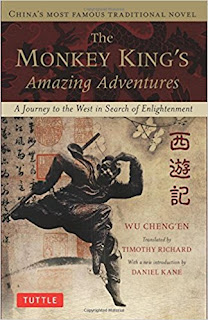 Monkey: A Journey to the West
“Monkey: A Journey to the west” is one of those stories that is a lot older than the actual publishing. When Wu Cheng’en wrote and published the story in the 16th century it was already an old folk legend that had probably mutated a lot over the years and there are likely many parallel stories over the theme. I have already encountered a few such stories (old Chinese legends), so this is not so much a story of the 16th century as a 16th century window into a traditional story.


Anyway, the story of the Monkey king is famous, also in the west. I remember watching cartoons on television in my childhood about the adventures of the Monkey king and although these shows are very faint in my memory I do recognize the tales in the book. The Monkey king Sun Wukong is a naughty and disrespectful fellow with immense powers. He jumps around on clouds and get into all sorts of trouble and that is great television for children.


As a book it is a little different. It is both a product of a different time and a different culture and it shows. From a modern, western perspective it is a story full of holes, strange jumps and awkward resolutions. You can have a carefully built up scene that gets resolved in two lines or hazards appearing out of nowhere. Responses of characters and those they meet are often weird, even bizarre and there is a repetitive pattern to the story that makes me grateful that what I read was a much reduced version compared to the original 100 chapter story.


Back in the seventh century the Buddhist monk and scholar Xuanzang went on a mission from Tang dynasty China to India to find and bring back holy Buddhist scriptures. This is a real historic event. In the folk legend however Xuanzang was accompanied by a number of disciples whose function was to keep the monk out of trouble. The Monkey was the foremost one of these (The others were Zhu the Pig and Sha the Monk) and in the legend he is far more central than the monk. In fact, he is a far more developed character than the rather one-dimensional Xuanzang,


The book can be divided into three segments.


The first and in my opinion the best one is the origin of the Monkey King. How he was created and lived in a valley lording it over his fellow monkeys and how he travelled the world to study to become immortal. Having achieved that status the next logical step was to challenge the celestial world. No matter what the heavenly powers did they could best him and all their attempts at sidetracking Monkey resulted in even worse trouble. When he ends up sabotaging the Jade Queen’s peach party they have had enough and trap Monkey under a mountain for 500 years. It is from this prison he is released in return for serving as a protector for Xuanzang.


And does he need a protector. For a master and important person he is incredibly helpless. Constantly he walks into trouble, and mostly deadly ones, typically involving a demon wanting to eat him. And every time Monkey will have to save him. About half the time Monkey manages on his own, no thanks to the other disciples, but just as often Monkey has to return to the celestial palace for some assistance. You would think the master is grateful, but, nah, his principles are more important and often Monkey is dismissed for some offense or another. The first few challenges are interesting enough but the pattern is always the same and I am actually grateful that some of the challenges can be resolved in less than ten lines. It gets really boring.


Finally, however, Xuanzang and company arrive in India, visit Buddha and get some scriptures to bring home. Everybody are happy, especially the monk who is flown back in eight days whereas the voyage out took 14 years. There is a lot of religious hokus pokus about how important this mission was and the end.


For a modern reader this is a story that needs some reworking and it probably has had that over the years. In its current form it is interesting, but rarely engaging. Fortunately, my copy had a lot of beautiful Chinese prints and that went a long way to stay my interest. Probably not a book I would read again, but not a book I regret reading.
Indsendt af TSorensen kl. 11.43