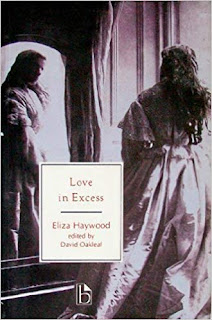 Love in Excess or The Fatal Inquiry


This was a nice surprise.

We follow the central character, Count D’Elmont as he develops from an inconsiderate and selfish playboy to become a steadfast and loyal lover. This happens through a series of romantic encounters with a range of women.

The first, Amena, is a girl of lower (though not low, God forbid) status, whom he dumps, literally in the middle of the street, when it threatens to become serious. Off she goes to a monastery, the catch-all destination for fallen women. The next is the mercenary Alovisa. She is a conniving woman of means (read: rich!) who has her eyes set on D’Elmont. He is not blind to her wealth and she really wants him so why not? Also she is the sister of his brother’s girlfriend and it is nice to help him out.

However, when the matchless Melliora appears it is love at first sight and while Melliora is restrained and virtuous (a good girl), D’Elmont embarks on a crazy courtship. Alovisa knows something is up but just not who the girl is. The neighboring Baron wants Alovisa (just a bit of shagging, nothing too serious) and his sister Melantha wants the Count. This of course spirals completely out of control leaving the Baron and Alovisa dead and Melliora off to a monastery.

Finally, D’Elmont, in his despair, goes to Rome to get distracted, but all he can think of is Melliora. In Rome there are more women who want him, but now he has realized that there is only one girl for him and so he is busy dodging their attempts at him, while at the same time helping Melliora’s brother get his girlfriend so she will not be sent off to a monastery.

This is hilariously fun. Especially the conclusion of part two was a riot. Straight out of Fawlty Towers. The book tries hard to become serious in the romantic relationships, but to no avail, I can always sense that glint in the eye, that mischievous smile, that is driving for comedy. It makes for a great and fast read.

For me it was also a bit of an eye-opener. I would have relegated this kind of story to “girl-pulp-literature” little better than a telenovela and as such written it of as not something for me, but hey, I loved it, it was truly fun to read.

I wonder if “Love in Excess” was ever considered for a movie or a mine-series. It would work great visually, and I would love to see it.
Indsendt af TSorensen kl. 14.13