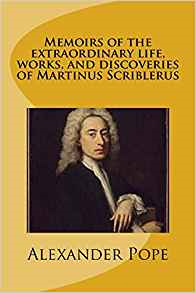 Memoirs of Martinus Scriblerus
In the early years of the eighteen century a group of writers formed the Scriblerian club. Central to this group was Alexander Pope and Johnathan Swift, but another four or five writers and poets were members as well, some of them on-off. The purpose, it seemed, was to write satire for the fun of it, in the name of an invented comical character Martinus Scriblerus. Years later, in 1741, Alexander Pope published a selection of these writings as “Memoirs of the Extraordinary Life, Works, and Discoveries of Martinus Scriblerus”.


Through this character the group satirized on every fad and absurdity they observed among their contemporaries, making Scriblerus an outrageous character. This covers anything from an obsession with ancient literature, over crazy principles on raising children to medicine and science. The book covers the life of Scriblerus from his birth to his eventual demise, not death, but simply disappearance, but the chronology is simply used to fit in age appropriate satire.


Most of the satire is so rooted in its era that to a modern reader it falls pretty flat, though I can certainly see a connection to conspiracy theorist of today and the many absurd fads going around, from aversion to vaccination to bizarre dietary principles. In any case, for the most part you probably should have been there to find it amusing. This changes however midway through the book through two stories that hit the nail for me. The first is how Scriblerus and his friend, Crambe’s, studies in anatomy came to an abrupt halt when they sneaked a corpse into a rented apartment, woke up the entire house when they dropped it down the stairs and got arrested for murder. The second one was even better. Scriblerus falls in love with one part of a pair of conjoined twins, springs her from the circus where she works only to be sued by her former owner who arranges the other twin to be married to “a black prince” also in his possession. The court case is absolutely hilarious and absurd, each lawyer claiming the other guilty of anything from trespassing to bigamy.


Worth a mention is also the list of discoveries they attribute to the worthy Martinus Scriblerus. While many of them are rather silly, the ones belong to physics are actually very modern and relevant questions today, such as the mass of the universe, a calculation on the lifespan of the sun, how to apply the force from the speed of light to mechanical purposes and so on. This just goes to show how these humanists were ridiculing the natural sciences of the day.


“Memoirs of Martinus Scriblerus is not a long book. The antiquated writing was easily compensated by the absurdly large font used for the print I found, so I went quickly through it. Despite this I am not entirely sure I would recommend this book. A few interesting sections is not enough to make it worthwhile the read, but I have a feeling this book was included on the List more for its influence on contemporary writing than for its own qualities.