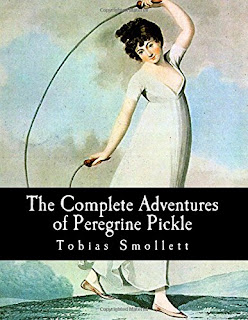 
“Peregrine Pickle” is not a perfect book. It is in fact rather uneven and in its picaresque style it also seems old fashioned for its time. Although there is a red thread and connection from start to finish, each chapter takes Mr. Pickle on a new adventure that often departs from previous chapter and just as often does not add to the general progression of the plot. The purpose seems rather to give Smollett a chance to satirize on various topics even if these only peripherally relates to the story of Mr. Pickle. If these detours had not been so amusing, they would have made the story drag, but thankfully practically all of them are.


Peregrine Pickle was born to parents who disliked him even as a toddler. Instead he was raised by his aunt and her husband, the crass but likable Commodore Hawser Trunnion along with parts of Trunnion’s old crew in his “Garrison”. Throughout his youth Pickle plays pranks on anybody who gets in his way, including old Trunnion. We follow his education, courtship of his beloved Emilia, his tour of France and The Netherlands as well as his escapades in London.


Everywhere Mr. Pickle goes he gets an opportunity to discover amusing situations or instigate such situations. Some of the most spectacular includes a puffed-up doctor who insists on relating everything to the greats of antiquity and his friend, a painter, who in naivety is a good match to the doctor. The dinner party the doctor serves up with delicacies from ancient Rome is simply spectacular. Every single dish is inedible, but the party, not to lose face must eat their way through it with catastrophic results to their dignity. Just as hilarious is the duel Pickle provokes between the painter and the doctor. A duel which is aborted because both get cold feet.


Back in London Pickle and his friend Cadwaller Crabtree plays pranks on the stuffed-up nobility by setting Crabtee up as a mystic fortuneteller who frames his victims in terrible predicaments. This reaches a zenith when two drunk gents demand WOMEN whereupon they are sent into a second room to find the wife of one and mother of the other to their mutual chagrin.


While we learn of a lot of pranks, the story is scarcer on personal details on Pickle and his companions. The third person narrative is partly to blame, but even then, the characters are rather one-dimensional. Pickle is proud and clever, but also vain and promiscuous, both of which gets him in trouble more than once, but little else do we learn of his personal character.


“Peregrine Pickle” is not a novel for great drama or sophisticated morals, but for the pure and simple entertainment. Despite a lengthy and completely disconnected story, “The Memoirs of a Lady of Quality” inserted in the second half, this is an easy and enjoyable read and much recommended.


I started “Peregrine Pickle” while I was still in Australia in February and now, finishing it two months later, the world is a different place. How weird to think of.