The History of Rasselas, Prince of Abissinia - Samuel Johnson (1759) 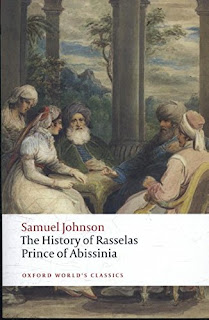 
This is of course neither the first, nor the last time that this subject is being treated in literature, but it is remarkable to see two so different and yet so alike treatments next to each other. Where “Candide” is flippant and satirical, “Rasselas” is sober and moralizing, but both use the disguise of a fantastical story to say that the ideal and happy life is a pipedream, mainly because human beings are deeply flawed.


In Johnson’s story we meet a prince (Rasselas) who is dissatisfied with the protected but idle life he leads in the secluded Happy Valley, a sort of prison resort for the royal offspring and their servants. He meets the poet Imlac who tells him stories about the outside world and Rasselas becomes convinced that out there he will find the meaning of life or, as Johnson formulates it, his “life choice”. Imlac and Rasselas tunnel themselves out of Happy Valley and are joined by his sister, Nekayah and her attendant Pekuah.


Once out of Eden they set out for the city of Cairo and spend the remainder of the book talking with high and low about what sort of life would be the best choice. We all know that the meaning of life, the universe and everything is 42, but Johnson refuses all shortcuts. No matter how you live your life, no matter what choices you make, there will always be drawbacks. Nobody are truly happy and no single choice is the right one.


Sometimes we get an interview with somebody they meet while at other times one of the characters report back from his or her investigations, but no matter who is talking it is with the same voice. This is probably the most disturbing thing about this novel. If we consider it a novel then each character should by rights have some characteristics more or less fleshed out in the course of the book, but that is not the case here. The characters have absolutely no personal characteristic, at least not when narrating. The voice is exactly the same. This is of course because this is not really intended as a novel but a poorly disguised intellectual discussion on philosophy and moral that Johnson is having with himself. Laying his words on different characters simply allows him to argue for and against, which incidentally seems to be the entire point. No argument is absolute, no certainty is final when it comes to the human condition. Hence the title of the final chapter: The conclusion, in which nothing is concluded. Johnson is running a campaign against absolute truths and while he is not, like Socrates, saying that he knows nothing, nor like a relativist saying that all has equal worth, he is saying that things are only as good as what you put into it and trouble lurks everywhere.


The discussion occasionally turn very highbrow and difficult to follow (this is one of the most annotated novels I ever read), but often the points are good and the discussion interesting enough to outweigh the book’s failings as a novel. I found the discussion on the immateriality of the soul particularly interesting, because it shows how your starting assumptions influence the conclusions. The argumentation is logical and follow Newtonian cause and effect rules, but then because of the religious imperative it gets to answers which are internally logical, but without this imperative completely illogical. It really shows how in any argument you need to agree on the rules. A modern discussion on the same topic can be found here for comparison.


“The History of Rasselas, Prince of Abissinia” is a cerebral experience and interesting enough, especially since it is short enough not to overstay its welcome, and while I doubt it would make any of my top-anything lists, I am happy I read it.
Indsendt af TSorensen kl. 12.20