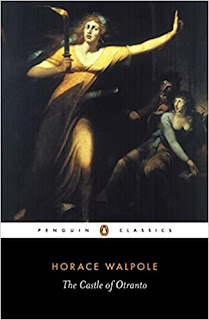 The Castle of Otranto

“The Castle of Otranto” is known as the first gothic novel, predating “Frankenstein” by half a century. It is also one of the shortest novels on the List, at least so far, so it did not take me long to get through it.

The book was published under pseudonym and claimed to be a long lost Italian manuscript from the age of the crusades. Only in the second edition did Horace Walpole admit to having cooked it up himself. An early example of what in cinema is called Found Footage?

Back in those medieval days Manfred, the ruler of Otranto, losses his sickly son, Conrad, to a giant helmet that fell out of nowhere and crushed him on his wedding day. Bereft of his only male heir Manfred decides to marry the bride instead as he is convinced his wife, Hippolita, is now barren. Isabella, the bride, flees in horror, helped in her escape by a gallant peasant.

Manfred is pissed at the girl and pissed at the peasant and starts hunting for her. When he learns she is hiding in a nearby convent he gets pissed at the friar protecting her. The peasant must die for his insolence at which point the friar learns that the peasant is actually his son, Theodore, and no peasant but noble as the friar used to be a count. Theodore is helped escape by Manfred’s daughter, Mathilda, both of whom fall in love with each other. In his escape Theodore finds the lost Isabella and protects her from a mysterious knight. Theodore almost kills him only to discover this is Prince Frederic, Isabella’s long lost father, who claims rightful ownership to Otranto.

Walpole took the old medieval romance setting and populated it with Shakespearean characters with “modern” (18th century) sentiments. It is actually quite a bit of an exercise. You think you are reading an ancient tale, but all these characters are a lot more complex and detailed and in a way human than you would expect. Did you ever in an old romance find the Lord rolling his eyes and rage with impatience at a domestic who cannot get to the point? Or characters confusing each other pursuing their own agenda? I am no expert on Shakespeare, but I believe this contrary agenda element is borrowed there. These characters certainly make the story a lot more interesting and fleshed out than you would expect over hardly a hundred pages.

The gothic sense of doom at this castle is enhanced by frequent visitations of ghosts. First by the strange helmet that kills Conrad, but soon a giant is sighted, a statue cries blood and the ghost of a hermit appears to bring a message to Frederic. The function of these ghostly affairs is unclear at first and I had Walpole suspected of adding them simply for ambience, but along the way they work to promote the downfall of Manfred, whose grandfather apparently usurped the title from its rightful owner.

I found “The Castle of Otranto” very entertaining to read and got a lot more out of it than the diminutive length led me to expect. There were even funny element straight out of Monty Python. This playfulness is supported by the background of the novel. Horace Walpole, son of famed Robert Walpole, on of the longest sitting prime ministers of Britain, was a collector type who loved anything novel and unique and never did anything twice. He wrote many things, but all over the place and never another novel like “The Castle of Otranto”. As I understood it, he may even have written it as a jest.

“The Castle of Otranto” is fun and messy and very much alive and never overstays its welcome. That can only be a recommendation.