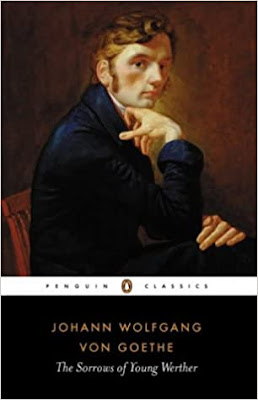 The Sorrows of Young Werther

Johann Wolfgang von Goethe was one of the big authors. I Germany they are very proud of him and visiting you will get bombarded with adds from Goethe schools to learn German. My own experience with Goethe is however very limited and I mostly know of him from Faust, his famous play.

Back in the day, though, what really made Goethe famous was “The Sorrows of Young Werther” (“Die Leiden des jungen Werthers”). This was all the rage back in the late 18th century and I found it hilarious to learn that there was even a smart Chinese printer who made a version for export in Europe. Why does that sound so familiar today?

“The Sorrows of Young Werther” is a fairly short novel in the sentimental style that was so popular at the time and of which I already had a few examples. Only, Goethe goes all-out. His protagonist, Werther, is hyper emotional and sensitive to a degree that makes Rousseau look drab. In a modern context he would probably be diagnosed as bi-polar, but in the 18th century this sensitivity is merely fashionable. Werther gets moved by the simplest things in nature and gets a kick out of just watching people, but he is also easily agitated and provoked into a frenzy. We meet him as he arrives in Wahlheim where he soon meets and gets enchanted by Lotte. Only, Lotte is already engaged to Albert, a very decent and agreeable young man whom Werther also befriends. Soon Werther is in an odd triangle, being madly in love with Lotte while having an amiable friendship with Albert.

Eventually, Werther leaves the couple when this is getting too weird. He embarks on a diplomatic career but keeps clashing with his employers. It is clear that Werther considers himself smarter than all these men, but he is also out of touch with decorum and his career flounders. In disappointment he returns to Wahlheim and continue the triangle, but with a melancholic and depressive slant. He is like a moth to the flame and it is devouring him until in the end he kills himself.

The interesting thing here and the brilliance of Goethe is that we see all this with the eyes of Werther. Goethe sets up an epistolary novel, what today would be called “found footage”, consisting of letters Werther writes to his friend Vilhelm. That means we are supposed to read Werther’s own account of the affair. Sometimes he is completely biased as an unreliable witness, projecting his emotions on what he observes, sometimes he more objective, trying to be rational, to the extent of rationalizing his own actions. His emotional rush are the colors used to describe the scenes and Werther is always in an emotional state. The epistolary novel is at this time not new, but Goethe uses it very successfully to paint this character by letting us witness his writings. That the character itself is insufferable is another thing, but there is no question that Goethe manages to bring him to life.

Part of the legend is that the novel is partial autobiographical, Goethe was himself involved in such a triangle, and many readers saw this as an endorsement of the hypersensitive lover and made an ideal out of this desperate infatuation. I think this impression is merely a result of Goethe’s skill, that Werther becomes so real to the reader, a bit like Orson Welles “War of the Worlds” radio show, that they buy into the character and the romance. I think Goethe was a lot more critical to Werther, I think he painted him a bi-polar, as a sociopath who is unable to cope with life, more like a warning than an example. But because Werther is so real he was misunderstood.

This was maybe not my kind of book, triangle dramas are not my thing, but Goethe’s talent is unquestionable, and I look forward to his other entries on the List.