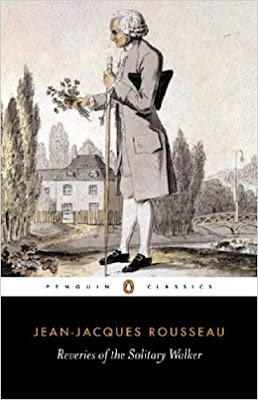 Reveries of the Solitary Walker

I have to say I am starting to get fed up with Rousseau.

The “Reveries of the Solitary Walker” is the third book from Jean-Jacques Rousseau on the List and, I get it, he was an influential personality during the Enlightenment, but you can only take so much complaining from a dude.

From the onset of doing this List I have been a bit confused what exactly made books qualify for the List. Does it have to be a novel or fiction? Why have important early works been omitted? Religious texts, fables, legends, science etc. To me it seems a bit random what qualifies and what does not yet in the case of Rousseau apparently anything goes. “Julie” was a novel, “Emile” was a philosophical work, “Reveries of the Solitary Walker” is a… not really certain… a defense? Or just plain complaining? And later on there will be a fourth that looks to me like an autobiography. There are many versions of the List, but they all seem to include all four books. Somebody must think this dude is really important.

As I understand it, Rousseau wrote “Reveries of the Solitary Walker” to defend himself against his persecutors. He is quite convinced that there are enemies around every corner and their entire purpose is to make his life miserable. Considering most of this book is devoted to these persecutors it is remarkable that we never learn why they are out to get him, what it is they claim Rousseau has done to them or even what it is exactly they do, except that they are everywhere.

Hmmm… I think that is called paranoia.

Rousseau’s escape from all this persecution is to dream away, to get absorbed in his own thoughts, whether these are thoughts on botany, past joys, children or fundamental concepts such as being a good person or happiness. When Rousseau does get absorbed in these thoughts it is almost pleasant to read, but it never lasts long. Eventually complaints sneak in and take over and we are back to all the people hell bent on ruining his life.

There was precious little to take away from all this ranting. I did enjoy his arguing why botany is the only natural science worth pursuing when you are a lonely old man, mostly because of the amusing images he paints of why it will not do for him to roam mines and chemistry labs or chasing animal to cut them up.

The rest was just pages I had to get through.

There must be better books to add to this list.