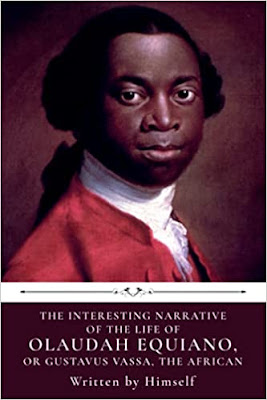 The Interesting Narrative of the Life of Olaudah Equiano

Some of the most interesting books on the List are the autobiographies. I previously read the amazing story of Bernal Diaz del Castillo and several the books have been pretended autobiographies (fiction in first person narration) and that of Olaudah Equiano (with the most absurd long title of “The Interesting Narrative of the Life of Olaudah Equiano or Gustavus Vassa, the African”) follows in those footsteps. His life was an odyssey worthy of a tale.

Equiano was a native West African, who at a tender age was kidnapped from his village and sold to slavers. Arriving in the West Indies he is “lucky” to be sold to a “good” captain of a ship who uses him as part of his crew. In that function Equiano takes part in the Seven-year war against France as a young boy. This is not without physical danger as Equiano is close to getting shot and bombarded to pieces. During his travels Equiano visits England and gets familiar with family and friends of the captain and he starts learning to read and do math. At the end of the war, when he expects to be set free and get a share of the prize money, his captain pulls a trick on him and sells him as a slave to a ship going back to the West Indies. Turns out the captain got a new wife, and she wants him to get rid of Equiano because he had become a favorite with his former wife.

Again, however, Equiano is “lucky” and gets sold to a merchant who is decent to his slaves and uses him and his slaves to work in his shipping business. In that way Equiano gets to sail all over the Caribbean and see and experience firsthand how slaves and black people in general are treated. Ultimately, Equiano is able to buy his freedom, but even as a free man there are no justice for black people and he narrowly escapes many dangers, both from white supremacists and from the natural dangers of a seafaring life.

The general message and ultimately the purpose of the book is to be an eyewitness to the injustice and inhumanity of the slave business and how wrong it is that there is no justice whatsoever when it comes to colored people. Equiano formulates himself in a way a British gentleman or lady would be familiar with in the eighteenth century and acts according to what is considered common sense and gentile behavior, effectively removing the “them and us” barrier. Equiano is on the inside, telling the reader he is no different from her or him, so why does he need to be treated any different? That he turns (intensely!) pious towards the end even serves to remove religious arguments (heathens are lesser humans).

As such it is incredibly effective, even for a modern reader. You cannot read this and not feel indignation and shame of belonging to a nation that dabbled in slavery (yup, some of the rich eighteenth century mansions in Copenhagen were built on slavery wealth). It is easy for us today to condemn slavery as an inherent evil, but it took more back then. It is convenient to shut the eyes on the darker consequences of what brings you wealth, that has not changed in 230 years. The book was therefore also a highly political text in support of the abolitionist cause and given political agenda’s ability to color things favorably it is possible that not everything in this text holds water. Some criticism has been raised that Equaino was in fact from South Carolina and not West African, but it actually matters little. Even if some of the events are imagined, they are painted so vividly and true to a reality in the West Indies that the message rings true.

Even without the political angle, this is one spectacular odyssey and the sheer adventure of it was enough to keep me riveted throughout.

Only miss for me is the religious emphasis in the last three chapters. They are mostly filler and I could have done without them.

Nevertheless, strongly recommended, both as an interesting adventure and for anybody interested in slavery and race issues. There were times reading this I wondered if we really have come that far in 200 years.