The Trials of Persiles and Sigismunda: A Northern Story - Miguel de Cervantes (1616) 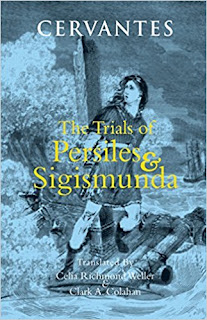 
Cervantes was wrong. Where “Don Quixote” has earned its place in popular culture “Persiles and Sigismunda” has largely disappeared. And for good reason. It is not anywhere as good as “Don Quixote”. Not even close.


“The Trials of Persiles and Sigismunda” is a “road movie” or the equivalent in literature, following the journey taken by two young characters, the heroic Periandro and the matchless Auristella, and whatever retinue they may pick up, from a barbaric island in what I presume is northern Norway to their destination in Rome. In the course of this journey they suffer an endless string of mishaps and accidents that all threatens to kill, separate or at least marry them off against their will. These are not minor events and Cervantes gets points for inventiveness: Human sacrifice to an evil god, shipwrecks, pirates, sorceresses and lovesick kings, princess, crown prince and dukes.


Each challenge is quickly presented and solved in three to ten pages and on to the next challenge, an episodic form reminiscent of the picaresque novel. That is good for pacing, but it is also too fast. I cannot help comparing it to an endless tv-series of half hour episodes each with a resolved, almost independent story.


The book is divided into four parts: The sea journey to the land of Hibernia, the stay at Policarpo’s court on Hibernia and their escape, the land voyage through Spain and France and finally the climactic ending in Rome. Of these the second part is maybe the most interesting part. It is relatively static, the party is stuck on the island as guests of King Policarpo, but it involves at lot of people, each with their agenda and a situation that is spinning out of control.


There is a lot of potential in the story. The framework of it makes for an interesting tale and the challenges are inventive, coupled with a host of interesting characters. Where it goes wrong for Cervantes is in his desire to write a refined book. That means a book in exquisite language and with a moral gravity. This becomes a straitjacket rather than an asset, especially to the modern reader, and the first victim is the humor and sardonic wit that made “Don Quixote” such an ageless pleasure to read. Without this, Cervantes is reduced from exceptional to standard and it is difficult to see why this story should be regarded as anything special.


Still I have a nagging feeling that Cervantes could not help himself and exaggerated the religious themes so much that it became almost sarcastic. I have no proof of it, but it is possible to read the ending in that context. Persiles and Sigismunda has for the duration for their journey been posing as brother and sister under the names Periandro and Auristela, but we know they love and are committed to each other. Especially Persiles has been going through hell to serve and save Sigismunda repeatedly. Yet, at the end of their journey Sigismunda tells him, without blinking, that, sorry dude, I cannot marry you, I want to devote my life to God. This is a very pious move, but also completely outrageous given the ordeals they have been through and totally without regard for Persiles feelings. A part of me wants to think that this is Cervantes slam at the church, but I am not convinced because it is also completely in line with the tone of the entire book. He might actually mean that this is a good idea.
Indsendt af TSorensen kl. 14.11