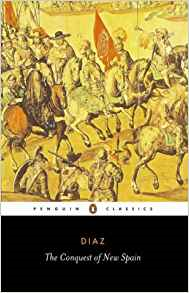 
For those unfamiliar with that particular event, these were a number of expeditions that set out from recently settled Cuba in the period 1517-21 to discover new land with potential riches to be found. Two expeditions, both joined by Diaz as a regular soldier, discovered Yucatan and the land behind it (Tabasco), land settled by Indians of a higher culture than what they had found on the Caribbean Islands and, not least, rumors of a mighty empire rich in gold.


This triggered a third and much larger expedition to find this mysterious Mexico and Cortes was send out with a few hundred soldiers to see what could be found. As it happened Cortes found the Mexicans (the Aztecs) and first befriended them. Later when things turned sour he barely escaped Mexico City, but with a reinforced army he went back and conquered Mexico.


The uniqueness of this particular account is that it was not written by some dusty historian or colored by political or religious agendas, but presented in vivid details by one on the guys on the ground. Bernal Diaz view is of course his own and he was a Spaniard of the 16th century with all that entails, but barring that the account is surprisingly objective and the portraits of his officers and opponents has all the positives and negatives of real life characters. It is as if Diaz has concluded that the events themselves were heroic enough as they were, there were no reason to dress up or exaggerate anything, not even a white wash to make anybody look good. The result is a very readable, very realistic and incredibly informative story and one that I just flew through. This is exciting reading.


Let us first get a few misunderstandings out of the way. The few Spaniards (400 man strong initially) did not beat the crap out of the huge Mexican army because they all came with firearms and just gunned them down. This is still early 16th century and firearms a few, expensive and unreliable. There was a detachment of musketeers along, but the majority was fighting with swords, lances and crossbows. Arms not terribly different from those the Mexicans had. The Indians were much more impressed with the horses the Spaniards brought, but eventually the Mexicans learned how to counter them and they were of limited value in the actual conquest. Instead Cortes was an excellent diplomat and when he learned about the internal divisions among the Indian city states he cleverly exploited that and gained a lot of local allies among the Indians, not unlike the Romans in their time. During most of the battles the numerical majority of his forces consisted of allied units. Secondly the Mexicans relied heavily on signs and advice from their gods, which resulted in random and of counterproductive actions including a prophecy that some white bearded men from the sea would come to conquer their lands.


A post-colonial view on the Spanish conquest would easily view the whole affair as an imperialistic landgrab and plunder of an innocent indigenous people. This is not entirely wrong. They did want land and convert souls and particularly find gold. Diaz makes no excuses there. But in their view the Mexicans where an evil empire that had suppressed and enslaved the entire region and used their slaves as human sacrifices to their gods and munched on their flesh. In their eyes they were liberating the country from these vermin. I certainly find it difficult to entirely discredit the Spanish for unseating the Mexicans, although their missionary zeal does not look particularly good, nor was it very helpful for their operation. Interestingly, it is their accompanying priests and friars that keep Cortes in check and makes him tone down the religious zeal.
Indsendt af TSorensen kl. 12.31