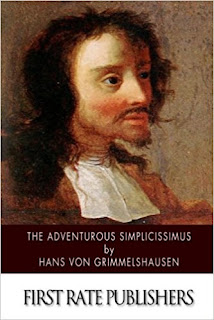 The Adventurous Simplicissimus
The 30-year war from 1618 to 1648 was in almost every way a major event in European history. What started out as a religious strife between Catholic south and Protestant north developed into a major conflict that involved all of Europe, from Spain to Sweden and from England to Russia. Over the course of the 30 years the war lasted shifting alliances meant that religious fault lines took second seat to political ones and at the conclusion of the war the Habsburgian empire’s dominance was broken and France, The Netherlands and Sweden emerged as leading nations.


However, the real and lasting impact was on the ground. Germany was the battleground for most of the fighting and somewhere between 25% and 40% of the population died, 8 million people has been mentioned, and the divisions caused by this war have lasted to this day. That makes the 30-year war comparable to The Black Death, World War I and World War II in scope, damage and lasting impact.


Today the war is largely forgotten by the public and in media.


Hans von Grimmelshausen’s “The Adventurous Simplicissimus”, published 20 years after the war, uses this war as setting for a picaresque story about a young boy who from a very tender age gets involved in the conflict. The boy’s, Simplicissimus’, farm is attacked and plundered by soldiers and the young boy escapes to the woods where he lives for a few years with a hermit. That makes him a very naïve and neutral witness to the mess around him and Grimmelshausen can through Simplicissimus’ ignorance freely comment on the absurdities of the war. Of course this makes Simplicissimus to be perceived as a fool, but as a fool he can unhindered speak his mind.


Over the course of the book Simplicissimus adventures are numerous and varied. He is sometimes employed by one side, then the other, then back again. Making fortunes, losing them, making a reputation as a cunning soldier, falling in disgrace. Eventually he gets married only to be prevented from returning to his wife who eventually dies. A summary of the events is quite impossible and ultimately pointless. For Simplicissimus the vagaries of his life make him a humble man who lives on the short time rather than long term planning, but in the process, we get quite an adventure.


Von Grimmelshausen’s style is similar to those Spanish authors I have been reading. The events are briefly described, and an episode may be concluded in just a few pages and then on to the next episode. There is a continuation in the story, thankfully, but I get the impression that von Grimmelshausen did not quite know where the story would lead him and merely made it up as he went. That means that although the individual events are interesting enough there is a lack of direction to the novel. He could have ended it in a number of places, but every time decided to pick it up again and extend Simplicissimus adventures.


I did enjoy the wry humor of the novel. Old as it may be the dark sarcasm over the absurdities of war is still valid. As is the bleakness when von Grimmelshausen goes in that direction. Life is cheap during war and death is ever present. As such I felt I learned a lot about this terrible period in European history. Simplicissimus story is fiction, but the setting and the various elements to the story are real enough, with the exception of a few fantastic elements and, well, some divine interventions here and there.


The main problem I had with my copy was some weird translation choices. Where the translator had mostly (but not quite) modernized the general language of the novel, all dialogue was translated into an archaic language. I do not really see the point of doing so. This is not a question of preserving the original German text, but about translating it to a different language. Whether this being an archaic or a modern language should not matter, so why not translate it to modern English? This made for very slow and often frustrating reading and that is a shame when the story has as much potential as this one has.


Nevertheless I will recommend this book, especially if a better translation can be found. It is an excellent window into a forgotten, but important, war and an interesting and captivating adventure in its own right.