A Sentimental Journey Through France and Italy - Laurence Sterne (1768) 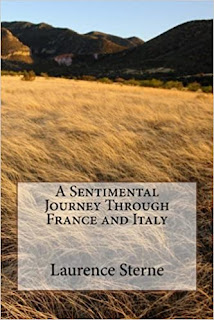 A Sentimental Journey Through France and Italy

After the menace which was “Tristram Shandy” I was apprehensive going into another book by Laurence Sterne. I feared it would be a repeat of the chaotic, well, lack of, narrative, but I was pleasantly surprised that “A Sentimental Journey Through France and Italy” is a quite different piece of literature.

Most notably there is a coherent narrative and Sterne is much less inclined to tease the reader with narrative sabotage. There are digressions, yes, but of a different kind that meshes far better with the story. This is also, as hinted by the title, a venture into the “Sentimental” genre which was very much in vogue when the novel was released.

The sentimental genre, I am learning, tried to perceive the world emotionally rather than rationally. For example, rather than writing that something is red, the sentimental writer would describe how the color made him feel. This makes for a very impressionistic style of writing, which I can mostly compare to that of Marcel Proust.

Sterne’s character, Yorick (whom we met as a minor character in “Tristram Shandy”) is travelling through France and describes his experiences and encounters, not so much factually, but by referring the thoughts and the emotions going through him. This makes it at times a bit difficult to follow and he does, characteristically for the sentimental writer, skip quickly over the boring parts. Practical things of little sentimental value are often ignored, while he seems immensely touched by the various people he encounters.

Yorick, supposedly a priest of sorts, have a fond eye for the girls. He falls in love with practically every girl he meets, be they nobility or servants and is quite unapologetic about it. One such encounter hints that the romantic idea gets a bit further than that, confirmed by the fact that he gets kicked out of the hotel for having brought a girl to his room for over two hours.

Beside being a sentimental story, it is also a travel novel, describing a journey through a foreign country, something which was apparently another fashionable thing at the time and perhaps founded by this novel. As such the journey is an integral part of the story, maybe even the point of the story. There does not seem to be a particular personal journey for Yorick, this is more a matter of describing encounters of sentiment Yorick has, travelling through the country.

Eventually, this is an unfinished novel. Laurence Sterne died before it could be finished and so Yorick only just manages to cross into Italy, stuck at an inn with another lovely lady, before the book abruptly ends. It is difficult to say where the novel eventually would have gone, statically describing encounters or toward some sort of end for Yorick, making it a personal journey. I could hope so, but alas we will never know.

I am not certain I would call “A Sentimental Journey Through France and Italy” a great book, but it was so much easier and more satisfying a read than “Tristram Shandy” that I am probably overrating it.  I definitely got a lot more out of these few pages than the many times larger “Tristram Shandy”.