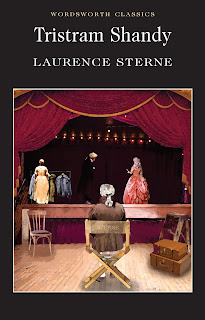 The Life and Opinions of Tristram Shandy, Gentleman

“Tristram Shandy” by Laurence Sterne is another of those novels I have known by name, but never read, not even known why it was famous. Having read it now I understand why it is considered special, though I feel incapable of appreciating it.

The point to “Tristram Shandy” is… that there is no point. It is a fairly long book that goes nowhere. While it is supposed to be an autobiography of the author, going by the fictional name of Tristram Shandy, it is merely occupied with vignettes on his close relations, particularly his father and his uncle Toby. These vignettes are in turn constantly interrupted and digressed from, sometimes to make a remote point and sometimes simply through sabotage. The narrative is broken up to a point that you never understand the chronology and how anything ties together. This anti-structure has been praised as proto post modernistic, but to me it merely comes across as a childish and indolent practical joke.

The vignettes themselves has a comedic aim. The father and the uncle are both odd characters, the father having far-fetched theories for anything and a combative way of promoting them and the uncle, kind, gentle and naïve has an obsession with warfare. They are interesting types with a lot of potential for ridicule, but I must be too far removed culturally and perhaps also language-wise to pick up on the humor because I missed most of the punchlines in as far as there were punchlines and those I did get hardly made me smile. The father’s obsession with noses and names is sweet and ludicrous and so is uncle Toby’s obsession with the campaigns he is reenacting in his backyard, but ever so often will Sterne’s attempt at bringing a story to a head be derailed by his own interruptions or be masked to a degree where I simply missed what was going on.

Sterne is best in the few cases where he allows a story to go uninterrupted over a few pages, such as with the big-nosed Diego who causes an uproar when people start obsessing over his nose, or the love affair of uncle Toby. Those moments hold some promise to what this book could have been if Sterne had gone for a more conventional style. This would of course have made it less special but so much more accessible to the reader.

As it is, I found it very hard to stay attentive. Without a narrative and with digressions even within the sentences I often lost track and found my mind drifting. Looking back over the section I had just been through I could not for money or fame recall anything of what I had just read, and I suspect that was largely the point. To tow the reader around by the nose without taking him anywhere.

I did learn a new word, though. From now on “hobby-horse” will be a new expression of mine. A hobby-horse is a passion, doctrine or interest (obsession, perhaps?) that would color everything you do. This is most notably used to describe uncle Toby’s all-consuming interest in warfare. Curiously, the Danish word for it, “Kæphest”, means exactly the same and I cannot help thinking that this may in fact be the origin of the word. Nice, another piece of useless trivia…

Although I understand why “Tristram Shandy” is famous, I hesitate to recommend it. I got far too little out of it and found it an ordeal to get through it. There is the potential for something amusing here but it rarely becomes more than a promise.