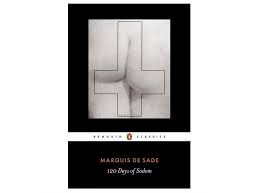 This was one of the most disgusting and horrible books I have ever read. It started bad, got worse and with 22 pages left I had to break it off. It was making me physically ill reading it and it is simply not worth subjecting yourself to this, not for completing a list. So, yes, for the first time on both the book and movie list I have not completed an entry.

There is no way to communicate the disgust I felt with this book, my attempts can only be feeble, and I am not certain I really want to make the attempt. This is a book I would rather forget I ever read.

Four criminal perverts are setting up their ultimate festival of their particular kind of debauchery, each representing a part of the power structure in France at the time: The nobility, the church, finance and the courts. The festival is going to last 120 days and takes place on a remote and isolated castle. To entertain them they kidnap eight young girls and eight young boys, age 12 to 15, thereby under-age, at least by our standards. Eight well-equipped men, four elderly women to keep order among the children and four “storytellers”, renowned bawds, who will tell of 150 cases of depravity each. In addition, each of the lords bring a “wife” which is actually their daughters they have married off to each other.

A setup for a juicy pornographic novel if not for the pedophilic and incestuous elements. That illusion, however, soon bursts as this goes off the rail in a big way.

The stories start in the light end with some pedophilia and toilet sex. Gradually it gets worse with rape and violence and in the end torture and murder. The catalogue of horror is made so much worse by being driven by lust. The torment and death of countless women and children is for the sexual gratification of perverts with limitless power. Because de Sade never finished this book the last three chapters are mercifully only in note format, otherwise I would not have gotten as far as I did, but frankly, you only need the headlines to visualize the explicit horrors.

Meanwhile, the four lords have their way with their attendants, following the same patterns as the stories. They eat each other’s shit, force the girls and boys to eat theirs, beat them silly and abuse them in any way possible. As the children loose limbs, teeth, suffer burns, scaldings, bleedings, castrations and eventually murder, just so the lords can get off, this becomes impossible to read.

Some political motives have been given de Sade, that this is sort of how the rich and powerful abuse the citizens of the country, but it is all too obvious that he wrote this to get off himself and that he wants us, despite our horror to feel sexual excitement too and that makes the entire thing even more disgusting. De Sade was imprisoned when he wrote this, and frankly, it sounds like he belonged there.

I do not want to have anything more to do with this snuff and I wish I could erase it from my memory. Unfortunately, I have a movie coming up all too soon with a similar title and a similar reputation and I am NOT looking forward. Yicks!

If you, dear reader, read this book and feel excitement, particular on the second half, I advise seeking medical help and perhaps lock yourself up and throw away the key. There is a very long way from consensual sado-masochism to the monstrous perversity of this book.

NOT RECOMMENDED FOR ANYBODY!