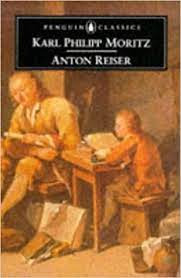 On my literary tour around the world, I am now in Germany with Karl Philipp Moritz “Anton Reiser”.

This was the most difficult book to find so far. It turns out that while this is a well-known and popular book in German, it is almost unknown outside German speaking areas. There exists only one edition in English (Penguin), which is now out of print and could not be obtained from any of my usual sources (If I did not want it in German). I finally did find it in a second-hand bookstore in Portland, Oregon and it cost me a fortune. Fortunately, it was worth it.

The big question when reading “Anton Reiser” is whether this is an autobiography or fiction. The truth is likely that it is a fictionalized autobiography, but with a very blurry line between biography and fiction.

Moritz intent seems to be to give a detailed account of the childhood and youth of a young man in order to describe what formed his psychology. To do that, it is not enough to describe external factors, but we need to creep into his mind to understand his thoughts and emotions. Though frequent enough in fiction, it is notoriously difficult to do this in real life. The only person you can truly get into the head of… is yourself. This seems to be the reason Moritz has used as a model for his character, Anton Reiser, himself. As a result, we have a fictional character on which Moritz prints his own experiences growing up. So precise is it that scholars have identified most of the characters and that most of the events are on record as Moritz own.

The inner life of Anton Reiser is therefore extremely vivid and detailed. It is not cooked down and trimmed to the plot as it would be for a normal fictional character, but elaborate, erratic and full of blind and seemingly inconsequential directions, which is at times confusing, but also serves to paint a very realistic picture and help explain the motivations and character of this young man.

Considering this is sort of an autobiography, Moritz does not pull any punches. The weaknesses and follies of Anton are on full display, explained perhaps but never excused. At times it even seems like he is raging and lecturing at his own youthful alter ego, so when Anton do have successes, they do not feel like bragging but rather a pause in the harassment.

The childhood and youth of Anton Reiser is problematic. He is raised in a cultic, religious family with little love and internal strife, learning from early on that he is a flawed person and that self-annihilation in the face of God is something to aim for. His apprenticeship to a hatter of the same cult is a disaster and when he wants to go to school to take an education, his father cuts him off. Forced to live and study on charity he is continually humiliated and lives on the brink of starvation. He is a gifted student, but his lack of confidence and resources repeatedly makes him fail to achieve his potential. As compensation for his dismal external conditions, Anton develops a very elaborate and vivid inner life in which poetry and theater plays a big role.

Here is one of the more confusing elements of the book. On the one hand Moritz declares that young people are in no state to choose what is right for them. That things like poetry and theater are poison that lead young people away from their true destinies and lead them into destruction. Without guidance the youth is lost. This rather conservative and preachy tone is then offset by the actual thoughts and motives of Anton Reiser. Moritz describes how important these things are to Anton, how this is what keeps him going and even alive and how destructive it is to him when his plans are (repeatedly) obstructed. It is as if Moritz is arguing with himself or rather, for the benefit of his contemporary reader, officially takes an approved of conservative attitude and undermines it every step of the way, saying that the conservative pedagogue simply fails to understand the youth.

This is either confusing or very, very clever.

Moritz was very interested in psychology and quite Freudian in his thinking, more than hundred years before that became a thing. He wrote quite a lot on the topic and “Anton Reiser” was his big case study. Unfortunately, Moritz died early (tuberculosis, I think it was) and the book series was never finished. The fourth section ends with a cliffhanger, clearly intended as a starting point for a fifth volume which never appeared.

I strongly recommend “Anton Reiser” to anybody interested in biographies but also for the very detailed description of the daily life of regular people in the second half of the 18th century. This is a gold mine on both accounts.