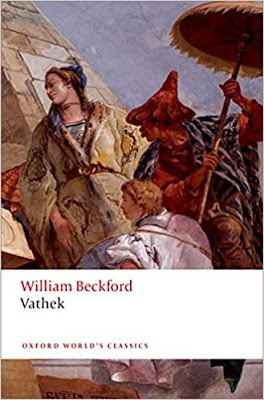 I have a suspicion that the editors of the book List have certain affinities. One of those is the fascination with the lurid, the worse the better. Another is with gothic themes. Maybe these affinities are even connected as both can be seen as transgressive. This is in any case my only explanation for including “Vathek” by William Beckford on the List. A place it has held through the various editions of the List.

The backstory of the novel is complicated as several editions were released in competition with each other. Beckford was assisted by some Samuel Henley in editing the English version and this was released by Henley in his own name without Beckford’s consent. As an answer, a sloppy draft version was immediately released in French with several mutations appearing until an 1816 edition which is supposed to bridge the various editions. This was the one I read.

Beckford was also a bit of a libertine and adventurer himself, not a moralist at all, and so, given his background, critiques have found it difficult to read the meaning and intention of “Vathek”, making it a bit of an enigma. Not certain I agree, though.

“Vathek” is presented as a tale from the deep Arabian past, not as a fantasy, but anchored in what was at the time considered fact. Somewhat like the “found footage” tradition in vogue now and then. Yet, it quickly spins into the fantasy world of the Arabian Night tradition, complete with demons, spectres, immense wealth, exotism and magic items.

Vathek himself is based on a historical Caliph in the ninth century who, in this version, is a despotic ruler obsessed with self-indulgence of any kind. When dark gifts and powers are held before him, he sees no reason why he should not get his hands on those and is led by the nose by a demon as well as by his mother Carathis, who herself is a witch, dabbling in dark magic. Vathek has absolutely no spine and only wants to indulge in his own cravings, which includes ruining the lives of everybody else without blinking, even sacrificing fifty children to the demon. He also takes the beloved daughter, Nouronihar, from one of his hosts on this, his journey to find those treasures.

The price, when he finally finds this temple of dark treasures, is his own doom, to be tormented in eternity and that is basically that.

The immediate interpretation of this story is a cautionary tale about over-indulgence and a warning against excessive power with no restraint. Something that would fit a moralist and not a libertine. This is, though, a story peppered with a playfulness and sumptuousness that fit very nicely to that of a rebellious youth who has to act within the morally acceptable and it is this playfulness that makes it a more fun and interesting read than had it been a simple moralist tale.

One of the curious details are the very extensive annotations. By volume they amount to a third of the text. They explain the background of many of the features of the main text to the extent of being the real source of information here, as if this fable is merely the vehicle to communicate a lot of oriental background story. Critiques have also read it as Beckford using the annotations to play games with Henley, letting him spend a lot of work and energy of wild goose chases, explaining details of minor or inconsequential interest. The result is, in any case, that the annotations are fully as interesting and entertaining to read as the main text itself.

The net result is an exotic tale full of the magic and gothic elements of oriental tradition, which would have entertained contemporary Europeans immensely. Today it is still an interesting read, though probably more as a curiosum and an exercise in juvenile exotism.

In any case, it is an easy read and I did not feel I was wasting my time. That, I suppose, is good enough.