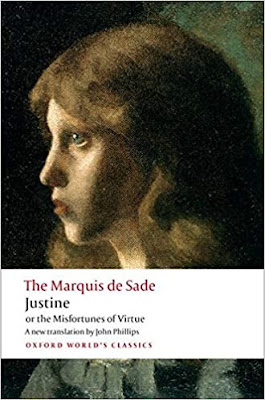 I went into “Justine” with very low expectations. After the disgusting and gory rape-porn which was “120 Days of Sodom”, I could hardly imagine this would be much better. Starting from such a low point though it takes only little to be positively surprised. I would not say I liked “Justine”, there is still a lot of rape-porn and undisguised, gleeful sadism on display, but de Sade managed to do something more. Alongside the torments, which de Sade evidently took a lot of joy in imagining, there are a lot of philosophical discussions which are a lot more interesting than the sex.

De Sade makes no pretense at realism here. This is a fable to demonstrate his points, a series of setups to enable the discussions he wants to make with his reader. Justine is a girl of 12 who is orphaned and penniless. She tries to be virtuous and maintain her religious faith all through, but wanders through one horrible scenario to the next where criminal and evil people abuse her in every way possible, physically as well as mentally. In between her whippings and penetrations, she manages to have philosophical discussions with her tormenters. Ludicrous of course, but that is beside the point.

The society de Sade describes is one completely corrupt. Where the powerful can do what they want because they are powerful and what men (and women) with power want to do is to satisfy their basic lusts. Sex, power, wealth, and to inflict pain and sorrow on others as long as it serves their interest. Those of power do it because they can and they do it because they care for nothing but themselves.

This was written during the Enlightenment, and I read it as a direct answer to some of those ideas brought to market. De Sade clearly sees Rousseau’s social contract as hopelessly naïve. There is no sharing of power, those in power takes no responsibility for the public, their interest is their own. The idea of a religious ideal that drive a society to a common good he considers hypocrisy. Those in power may pay lip service to religion but in reality they do not give a shit. Religion is just a means to control people.

The only way to get ahead in pre-revolutionary France was to play the corrupt game and be a criminal yourself. Virtuous behavior will only get you screwed over, literally.

This cynical and bitter outlook was likely driven by de Sade’s own fate. Not that he was virtuous at all, but he saw a world judging him that was, in his eyes, even more corrupt and criminal. How are they then to judge him?

In a revolutionary setting a lot of de Sade’s discussions easily become manifests for the revolution. The entire power structure was being turned upside down and now was the time to denounce it for all the rot it contained. Religion, money, public offices and noble rank were keeping people enslaved, but instead of suggesting an anarchistic freedom, de Sade seem to argue this freedom is a disaster, because without something to keep people in check, they succumb to criminal and egoistic lusts. Religion has tried and failed as de Sade make a lot of effort to point out.

Here it seems that readers of Justine diverge. Some appears to read that de Sade actually do want an ultimate freedom because he was a libertine himself and wants to be free to torment girls. Others read this as a warning against setting people free. That a just system must replace the Ancien Regime and that a religiously founded one is not enough.

Not great, but definitely better than “120 Days of Sodom”.