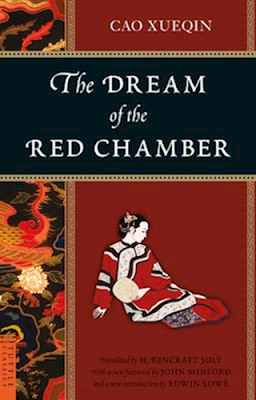 The Dream of the Red Chamber

It has been a while since my last book review. My excuse is that this, the next book on the List, was a big and difficult one to get through.

“The Dream of the Red Chamber” by Cao Xueqin is a massive work. When I first started googling it, I kept getting hits on an entire bookcase of volumes. The one I settled for, a single tome of 966 pages, turned out to be a translation of just the first 56 chapters of a total of 120 chapters. Translated by H. Bencaft Joly in the nineteenth century in a very literal style. I know that, reading this, I have by no means read the entire story, but I think I got a pretty good idea what this is.

Essentially “The Dream of the Red Chamber” is a slice of life in the mansion of a high-level noble clan, the Jia, in China in the eighteenth century. In the gardens, pavilions and apartments on the compound the men are mostly absent, and the women are largely running the affairs on their own. The only exception is Baoyu, an adolescent male and grandson of the current head mistress of the clan, the Dowager Lady Jia. Most of the other characters we follow are the women, sisters, cousins, aunts and maids. There is known to be upwards of 400 named characters in this epic novel and we are introduced to a lot of them in this first part.

The scenes are pictures of daily life in the mansion. Celebrations of new year, visits to the temple, guests arriving from far away, the poetry club, sickness, feasting, domestic chores, small disasters and other events as they would happen in such mansion. It all carries the impression of being scenes from real life, not a glamoured up drama, but life as it happens for this sort of people. A window into a world totally alien to a westerner like me, and yet so familiar in its domestic universalities.

Technically the story moves around between the characters, following first one, then another and a third with a handover where they meet, so it is an unbroken stream passing through many characters. Sometimes one of the cousins, or aunts or maids, only the lowest ranking in the hierarchy are treated as general background. The insights into the going on’s is impressive. Each of the named characters are fleshed out, whether it is Daiyu, Baochai, Xiren, Li Wan, Lady Feng or any of the others, which is quite incredible. I got the nagging feeling that the author actually knew these people.

Nothing much happens in terms of a plot. Or rather, the plot is the daily life in the mansion. While interesting enough on its own, it does make for slow reading, when nothing of consequence is happening. Domestic drama is only… so interesting. When reading up on the full story I can see that there is some actual drama in store further down the line. The decline that is only hinted at towards the end of the part I read will apparently escalate, so if at some point I decide to continue I will get that.

Another element that makes this a difficult read is the cultural differences together with the very literal translation. I have lived in China for half a year back in 2008 and I regularly visit China, at least before COVID and it has always struck me how translations invariably look like bad Google translations. I think there are some fundamental differences in language concepts that just makes it very difficult to translate the meaning and intention of a text and the result is often misleading or confusing. Add to that a cultural baggage that we do not share and things like humor or poetry becomes obscure and indecipherable. I found myself reading entire sections where I had no clue what was going on, or thinking I just read a bad insult, which turn out to be a compliment or the other way around. As a westerner I probably lost 40-60% of the meaning and details and while this was frustrating, eventually I got to learn to live with it.

“The Dream of the Red Chamber” provides a fascinating window into the old Chinese nobility and for that alone it is worth a read. It is a very slow one though and I suppose this is not for everyone. I am curious about the sequel, I just do not know if I have the patience for it.