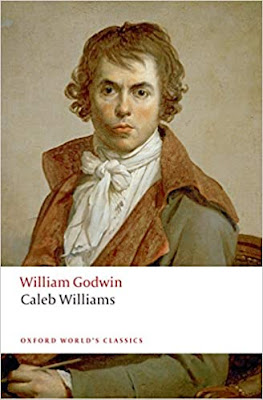 With “Caleb Williams”, or Things as They Are; or, The Adventures of Caleb Williams” I am back to British novels. The author is probably more know as the husband of early feminist Mary Wollstonecraft and father of Mary Shelley (Frankenstein), but “Caleb Williams” is sufficiently interesting to stand on its own.

The story is a first-person narrative of a young man, Caleb Williams, who is hired as secretary for Mr. Falkland, a country squire. The first volume tells the background story of Mr. Falkland, how he is a man on noble mind and intention, but fell into a depression after an affair with neighboring squire Mr. Tyrrel. This Tyrrel was a brutal fellow who was deeply envious of Falkland and tormented those who opposed him, such as his niece and a tenant, called Hawkins. After a fight with Falkland, Tyrrel is found dead, and Hawkins is blamed.

In the second volume, Williams cannot control his curiosity but is digging into this mysterious death. Despite several warnings to mind his own business, he finally learns, and Falkland admits, that it was he who murdered Tyrrel and let Hawkins take the rap. As a price for learning the truth, Williams must stay with Williams forever under close guard. Something Williams quickly gets fed up with.

When Caleb Williams insists on leaving, Falkland fabricates charges against him to send him to prison and possibly the gallows. Willams escapes and throughout the third volume we have a cat and mouse game with Williams constantly being pursued by Williams.

The immediate story serves as a thriller. It is tension on high level to follow first Williams playing with fire and then trying to evade his pursuers. Especially the last third reminded me a lot of the movie “The Fugitive”. Those that are pursuing Williams care nothing for his innocence, there is a price on his head and that is all that matters. He is setup by somebody to cover their crime, and as in “The Fugitive”, Willams only finds release when he stops fleeing and faces the real culprit.

Underneath, this is an undisguised criticism of the British legal system at the time and here it is important to keep in mind that the book follows on the heels of the French revolution, with new ideas about the order of society. Godwin’s criticisms are many, but notably the inequality before the law of those of rank compared to the servant class. Mr. Falkland can only be judged by his peers, and he is considered innocent on reputation alone. For a servant to even charge a nobleman with a crime is a felony in its own right, never mind his guilt. In this system, those without rank have no protection from the law. Secondly, Godwin is objecting to the conditions prisoners are subjected to. Life in prison is unspeakably horrible and prisoners are subjected to it without being convicted, but simply for being a suspect.

This is a commendable mission, and one that feels very much in order. I do not get the impression Godwin is exaggerating his examples, he had plenty of friends who felt the vengeance of the legal system. It is difficult not to feel indignation, but it is all plausible, although Caleb Williams is a tad more resourceful than most.

What I did not get was the ending. I read it explained that Godwin had a theory that the system could be reformed, not through revolution, but through understanding and honesty, by people simply talking to each other. Sounds commendable, but also, well, a bit naïve. Godwin is setting up that Willams should face Falkland, but rather than turn the table, they can simply talk it over and then get along. This despite Falkland being represented as a domineering and adamant opponent to Williams, almost a madman in his pursuit of Williams. I don’t know if I buy that.

Until that point though, this was a book I enjoyed reading more than I expected. It is lengthy at times, but especially the last third has a lot of drive, enough to keep me on the edge.

A moderate recommendation from me.